Months and days and nights and solstices and seasons and cycles and passages of
the year were before the Holy One of Blessing.  The Holy One passed through the
year, and then passed these teachings on to Adam in the garden of Eden, as it is
written…There will never cease from the earth planting and harvest, heat and cold,
summer and winter.  Seedtime is the season of Tishrei.  Harvest is the season of
Nisan.  Cold is the season of Tevet, and heat is the season of Tammuz.  Summer in
its time and winter in its time.—Pirkei de-Rabbi Eliezer 7

As the well-known verse from Ecclesiastes tells us, “To everything there is a season, a time for every purpose under the sun…” The Jewish calendar is not random but an ordered progression through the wheel of the year, with holidays falling at their proper time:  Hanukkah, the Festival of Lights, at the darkest time of the year;  Pesach at the time of new beginnings and Sukkot at harvest time.

The cycle of seasons also yield secrets of healthy living to keen observers of nature.  Ancient and modern healing traditions advise living in harmony with the seasons.  Judaism provides us with a shortcut to understanding the seasonal imperatives in the symbolism of the four elements.

Everything that exists is composed of the four elements, fire, wind, water, and
earth.  And these elements are in opposition to one another.  For example, water
extinguishes fire, while wind fans its flames.  Each of the elements exists in a
complex relationship with the others.  This claim that such diverse and even
oppositional elements can come together and form compound matter defies all
logic.  But they do.  A spiritual force unites them and completes them…and that is
God.

Each element corresponds to a season:  fire/summer; water/winter; wind or air/spring and earth/fall.  The oppositional relationship the Koshnitzer Maggid refers to is described as the Inner and Outer aspects of each season by Rabbi Jill Hammer in her book The Jewish Book of Days.  For example,  the Outer element of Summer is Fire, since Summer is characterized by heat; Water, the Inner element,  provides the balance to keep the fire in check so it doesn’t get out of control.

The chart below is a graphic illustration of the relationships of the elements to the seasons and months of the year. 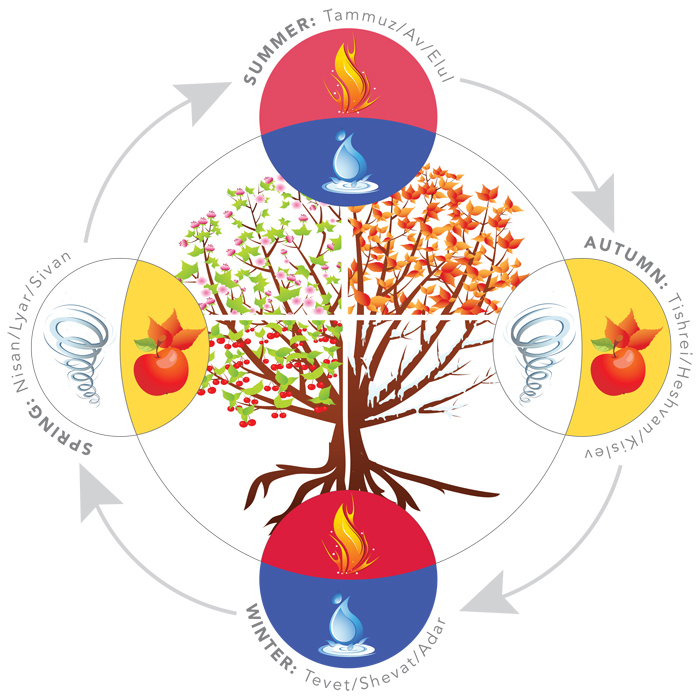